Some years ago, I came across a plant species list from an old colleague. He was trying to develop a planting scheme that satisfied some of the cultural norms and expectations that we have for a “lawn” while increasing the ecological function of the site with native plants.

Tomes have been written about the American lawn, which is our country’s most irrigated crop. See here and here for just a start. See here for an artful audio summary.

This blog is not another tome. Nor is it a screed. The conversation can get a little hyperbolic. The American lawn isn’t evil incarnate (at least not in the Midwest, where irrigation is not necessary & water is abundant), but we’ve clearly overdone it.

It’s not necessarily even the lawn itself… its the sprawling housing patterns adopted after WW2 that led to a massive increase in energy use via car dependency and the disinvestment of our historic urban cores. That’s fodder for many more blog posts. Anyway, by now we’re fairly stuck with much of the housing stock that’s already built.

Actually reversing course is not so simple. I wish it were. I’ve watched many a well-meaning institution try alternatives and the majority run into some operational or organizational problem that subverts it.

The truth is that, in my case, the lawn I inherited with my suburban home isn’t too difficult to manage. I haven’t found any reason to irrigate or fertilize. I only spray occasionally to target certain troublesome weeds. I mow it high (not like a golf course) with a quiet, emissions-free battery-powered mower that I charge with solar energy. Any alternatives won’t really save any time or money in my circumstance.

I’ve slowly removed some pieces of my lawn for vegetable beds and native plants (here’s a video I made about all the lovely flowers that have a home here). Even though I work full-time as an ecologist, I’m not a horticulturalist or landscape architect, so I face a bit of a learning curve. Like everyone else, I’m busy and can’t devote all my time to it either.

All that to say, this is not another blog about lawns. Or my lawn in particular. Instead, here’s an end-of-the-growing-season project summary of something we tried at work over the past 12+ months. It is less detailed than a final report with figures, all the photos, etc… but I just wanted to get something out there in the interim. Here you go! (And sorry for the repetition/wordiness).

Conventional turfgrass lawns in the United States are a cultural expectation for land use around human dwellings and workplaces. These areas are typically highly cultivated, requiring use of chemical pesticides and fertilizers, irrigation, and regular inputs of labor for mowing. In the Midwest, these European, cool-season grass are maintained within a narrow band of acceptable heights, so much so that it is commonly a part of municipal code and owners can be fined for violating these social norms. Lawns represent the largest irrigated crop by acreage in the United States.

A variety of conventional lawn alternatives have been tried around the country, but there are almost no examples locally or in the region. We have ample space & resources to conduct a pilot project to see what seed mixes might work with our soils & climate.

To conduct a pilot projection demonstrating alternative plant species selections that are compatible with most American cultural expectations for a lawn but have enhanced ecological impact over the status quo. (I.e. something more functional than a lawn, but less “wild” than a short-grass prairie planting).

The plots will be conducted on 2 sites at TCAD: at Moontree and Grounds.

The Moontree plot will only use cultural (non-chemical) methods for site preparation & maintenance (such as tillage, mowing, hand-pulling, and solarizing). The plot has very sandy soils and is 21’ x 195’ (4,095 sq ft).

Each plot will be split in half and receive two treatments:

Treatment A: Eco Grass, a blend of fine-leaved fescue blends that only need to be mowed a couple/few times a year. The ecological function here is not greatly improved, but one benefits from reduced mowing, irrigation, and inputs. Plus, it’s not an exotic concept to the average person. I sowed at the recommended 5 lbs per 1,000 sq ft (218 lbs/ac!).

Treatment B: A custom mix of 8 grass-like native species which I developed with a native seed company. My assumption is that by using native plants we are adding some ecological function, albeit much less than a diverse mix of dozens or hundreds of kinds of grasses and wildflowers. This mix could stand a couple mowings if necessary to maintain structure. It would still be green and low-growing like we are used to. I sowed at 11.6 lbs/ac.

For site preparation, the existing vegetation is killed (or at least greatly weakened). Moontree plot is tilled thrice, in July, August, and October 2020. 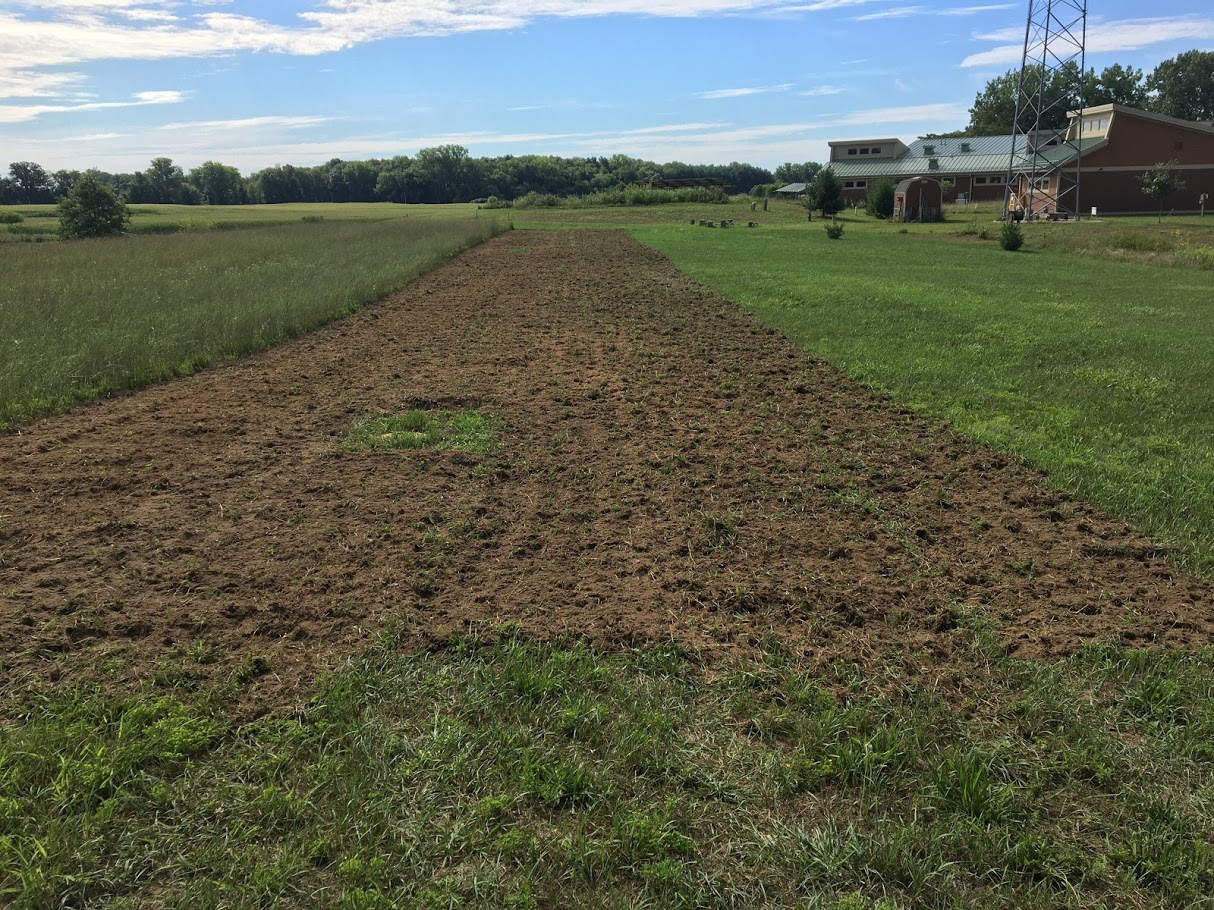 Grounds site is sprayed in July and August 2020 with glyphosate, achieving a pretty good removal of existing vegetation (seen here in September). 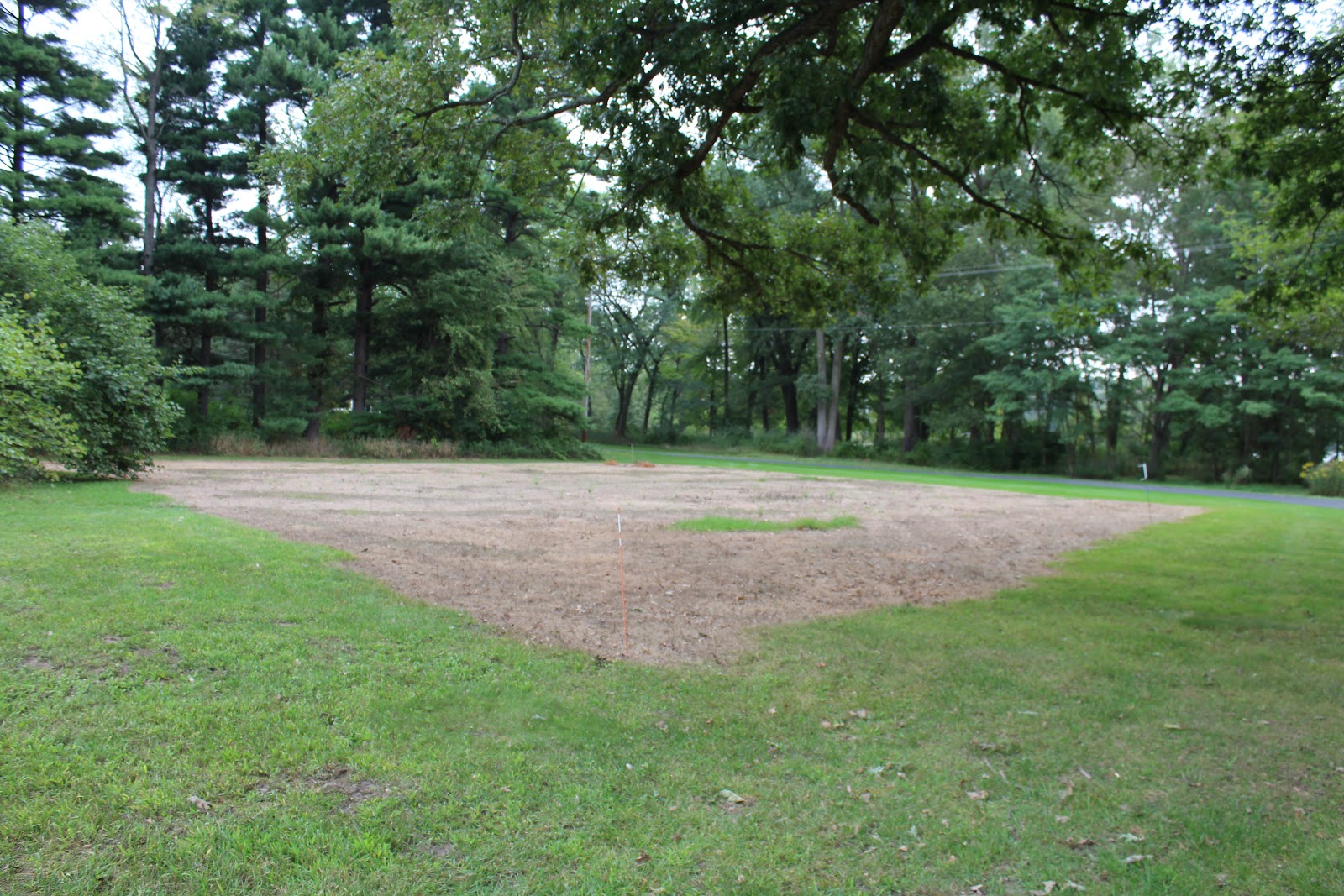 Each site was seeded with their respective mix on March 10, 2021. Sites were broadcast spread by hand.

The areas were high-mowed throughout the growing season as needed. Mowing was conducted to reduce competition from fast growing annual weeds, allowing the perennials to establish. Weed pressure was very light.

On July 20, the Grounds plot was sprayed with a broadleaf herbicide to reduce weed competition. This herbicide does not affect grasses or grass-like plants.

By June 14th, the entire Moontree site is… still sparse. It’s a very sandy, exposed site, so that’s not terribly surprising. It’s not ideal for the cool-season grasses we typically have for our lawns.

By August 24, the native mix treatment at the Grounds is… not great. I saw mostly crabgrass (weed) and wood sorrel (a nice plant, but not what I planted). Here’s a representative photo:

The Eco Grass mixture is faring a little better. I see some thick, dark green clumps that indicate it is starting to establish. But if I was a paying customer with high expectations, this wouldn’t cut it.

By Sep. 8, Moontree is still very sparse and weedy. However, I did find several Side Oats Grama that managed to grow and produce seed all in one growing season. A nice feat for a perennial.

The establishment for both seed mixes and soil types didn’t meet my expectations. Why the poor establishment?

1) I don’t recall the rainfall being ideal for germination (though this is a memory and I don’t have records on this).

2) Eco Grass can be sown in the spring, but they say it establishes better with a fall seeding because of fewer competing weeds (though I don’t think weed competition was a major factor).

3) The Native Mix was sown at a much lower density than the Eco Grass… 18X less. Even so, this was actually higher than what is often prescribed for natural area plantings (with the idea that establishment takes 3-5+ years), but we wanted a quicker-fill in. I could’ve simply cranked up the density, but that adds cost and I wanted the two seed mixes to be reasonably similar in price. So many trade-offs!

Another cultural barrier is that most of the native species are warm-season grasses that don’t immediately green up in the spring like we’re used to. Additionally, there is increased fire risk.

What options remain for us now?

1) I could scrap the plots and try something new. Unfortunately it’s almost too late to prep sites and sow for a fall planting.

2) I could overseed to try to make up for poor germination and low density, but then I won’t have a good feeling if next years growth just took longer or actually benefited from the overseeding. I suppose I could split the plots one extra time and overseed some and not others.

3) I could just give it another year & keep an eye on it.

I was initially inclined to Option 1. Lesson learned, move on. But as I looked at my project initiation notes, I wrote to myself about the Native Mix, “Development might take up to 3 years.” The words of one of my ecological mentors echoes in my ears: “Patience is a prairie word”. Granted, this isn’t a prairie restoration, and most people’s expectations about landscaping don’t involve patience.

So now, as the seasons march on and start to make my decisions for me… I’m leaning towards Option 3, with maybe an Option 2 overseeding of half of the sites.

One Reply to ““Lawn of the Future” pilot project”